We met the most extraordinary couple last week. Pastor Antonio, and his wife, Gregoria, stand at just about 5 feet tall. They smile a lot, and their hands are roughened by hard work and sacrificial labors. He is a bricklayer by trade. They met and married when he was 20 and she 15. As a young man, he managed to enter the U.S. and began working, and that was when Christians began to share the Gospel with him.

Pastor Antonio and Gregoria are from two very small villages in the Mountain range of Queretaro state in Mexico. He is from a village called “Jabalí,” and she is from a village called “Florida.” (Not resembling in any way the state of Florida in the U.S.A.!) Their villages are literally built on the sides, ridges, and summits of this arid mountain range.

We met them by “happenstance.” We had been looking for a way to access the villages and people who live in the mountains that surround the valley where we live. No one we knew here had any contacts for us. Our team of volunteers arrived December 27. On January 15, we still had no pastor or contact for the mountain ministry and I had exhausted every lead I knew.

Then, my phone rang, and Pastor Antonio (“Tonio”), was on the other end of the line. He had originally said they were busy the weekend of our dates and couldn’t host us, but he called back to say that we could go ahead and come. He assured me he had a church building we could sleep in, a bathroom (with no running water), and he could even provide us with a gas stove-top to cook meals on!

We set out with our first YWAM team to explore the mountains of Querétaro with my family of seven, 3 Australians, 4 YWAMers from the base in Bocas, Panama, and one Mexican volunteer. I drove my minivan, and Rob drove his big, white truck. His truck was loaded with 5-gallon bottles of water, food, and provisions for the next three days. In addition to food, we had ministry supplies like puppets, speakers, and instruments. Bedding was also an important commodity, and we packed stacks of blankets. The temperatures in the mountains during this time of year dip into the low 30’s at night, and there would be no heating to keep us warm.

This was a camping trip on steroids!

We met the pastor in a town called “Cadereyta” and followed him up the winding pass into the mountains. The paved road gave way to dirt and ruts, and I was glad it was the dry season and the dirt road was not muddy.

I steered my weighted-down van carefully over the rocky, rutted road, and tried to avoid scraping the underside on the rough terrain.

My time playing “MarioKarts” with the kids came in handy during this driving challenge! After a slow, forty-minute drive on the dirt road, we arrived at the village of Jabalí. We were amazed by what we saw. This village is nestled on the side of the mountain, and wherever you stand in the village, you have the ability to see for miles as the valley below the mountains stretches out before you. 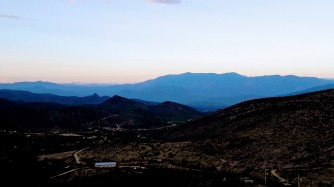 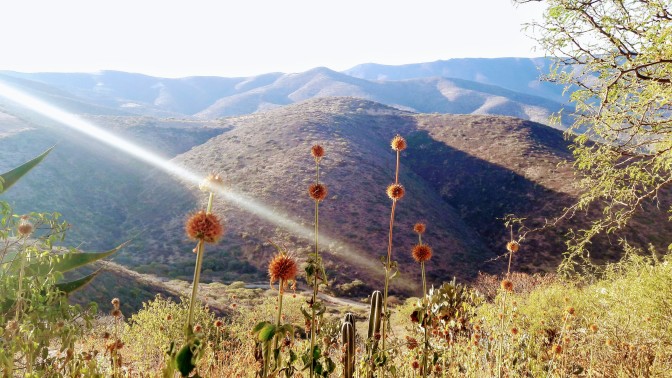 Pastor Tonio began to point out to us the villages in the distance, telling us how far it takes to walk, and which ones still have no church. It reminded me of the quote that David Livingstone heard that impacted his life’s work in Africa:

“In the vast plain to the north, I have sometimes seen, in the morning sun, the smoke of a thousand villages, where no missionary has ever been.” -Robert Moffat

As the valley stretched before us, broken up by the occasional village, my heart burned for the people who live so far away from our modern civilization who may have never heard the Gospel, or have gone their entire lives without ever experiencing the tangible love and presence of God.

Our team of YWAM volunteers was incredible! They carried all of our supplies down a winding dirt path to where the church stood. The path was a bit steep, and you had to take care to dodge the sharp cactus needles and animal droppings. We found out later the most common animal to use this path was a herd of wild donkeys that traverse the narrow mountain paths at night!

The little church was built on a flat terrace of land on the side of the mountain. It was tucked up next to a wall of dirt that led upwards, with the other side of the church built on the edge of the terrace before it drops away down the hill. You can stand in front of this church and see for miles into the valley. In the distance, more mountains rise up, layer after layer, representing other villages and people who are even harder to reach.

We stayed there for three days, ministering to the villagers and their children. We shared a bathroom with one toilet, which wasn’t bolted down, so, at one point, a team member accidentally knocked it over while using it! She simply picked it back up, positioned it over the drainage hole, and proceeded to finish. We slept under layers of blankets and struggled in the morning to leave our warm “nests” to dress in the cold morning air.

My favorite part of the week was the first morning we were there. Rob and I sat outside in the early morning mists with Pastor Tonio while he continued telling us his story:

Upon receiving Jesus, he returned to his village, and began telling everyone he knew about Jesus. The villagers were angry; they wanted nothing to do with Jesus or anyone who talked about Him. He began receiving death threats. Six times, people attempted to kill him. Two of the attempts were made by his own family members. Once, when he was preaching in the town square, a man came up to him with his machete drawn and said,

“I’m going to kill you right now. We won’t have any more of this Jesus talk.”

Tonio began to weep as he shared:

“I didn’t feel fear in that moment. I only felt mercy for him. I cried out, ‘Father, forgive him, he doesn’t realize what he’s doing!’’  As he prayed this powerful prayer, following Jesus’ own example, the man was literally thrust backwards onto the ground! Tonio saw no one, and as he watched, the man scrambled up and ran off. God miraculously spared his life numerous times, and he continues to preach in his village and in the ones nearby. Slowly, people began to listen to his message, and began giving their lives to the Lord.

They needed a place to meet, so Pastor Tonio began building a church. They didn’t have enough money to build the entire church, but they decided to start anyway. The first thing that needed to be established was a foundation. Now, that was something they could begin right away, because it didn’t cost any money to dig. The new believers arrived with shovels and pickaxes, and began to excavate a place to lay the foundation of the church. As money came in, they purchased materials. They had to carry, by hand, the construction block, bags of concrete, and even water, up the mountain to the terrace where the church was being built. It took them five years.

Tears moistened my eyes as I realized our team was sleeping, eating, and ministering in a little building whose foundation was dug by hand; whose walls were built, one slow stone at a time, by a small group of believers in a mountain village. Believers who wanted a special place to honor and worship God. Who wanted a building that was not a shrine to the virgin of Guadalupe, or to a dead patron saint. They wanted to worship a living God, whose name is Jesus!

The stray dogs traipse in and out of the building, sniffing about for something to eat. The neighboorhood drunks come and sit in the chairs, and hold their head in their hands as they blink away their drunken stupor. Families wander in, holding their bundled babies, searching for meaning in life. More importantly, Pastor Tonio and his wife are there, talking with people, loving them, praying for them, sharing truth with them.

As we further got to know them, we found out that he has a fifth-grade education, and she was only able to study until the third grade. He has another church in a village that is about a 2-hour walk from Jabalí. Sometimes he drives there. Other days, he walks. 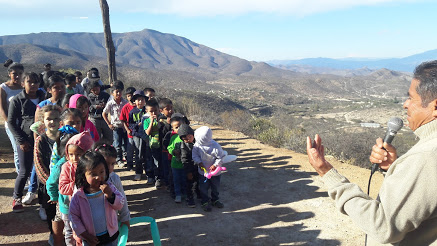 Pastor Tonio with some of the children from the villages.

He is still passionate about the communities and people who are unreached. He has invited us to come with him deeper into the mountains in order share the Gospel with them. Pastor Tonio and his wife, Gregoria, and their family, are heroes of the faith. Life hasn’t been easy for them, but they remain faithful to the Lord and to His call.

Hebrews 11:1-2 speaks about a great cloud of witnesses. Those who have gone before us: men and women of faith, who, having passed into glory, are urging us on as we run our race of life. I have always imagined the “greats:” men like Father Abraham; Moses, who divided the Red Sea with his rod; Stephen, who was martyred by stoning.

But, the more I meet people like Tonio and Gregoria, the more I am certain that there are so many who are cheering us on whom we have never heard about. Men and women of great prayer, sacrifice, and love for Jesus who never got to graduate high school, who never owned a car, who never wrote a book. People who poured out their lives, year after year, for the cause of Christ. Who, after witnessing for years, maybe only saw one convert; who, after traveling miles and visiting many, died in poverty and obscurity. Who, through sacrifice and hard work, built the a little church for believers far from modern conveniences. Though they may have been poor, they loved richly. They lived their lives driven by eternity, as this quote states so well:

“We shall have all eternity in which to celebrate our victories, but we have only one swift hour before the sun sets in which to win them.”

They were passionate, reaching just one more life for Jesus; they were faithful, ignoring society’s definition of success; they were genuine, loving even the least of these.

What an amazing place Heaven will be, as we spend eternity meeting such incredible people! As I think about men and women such as these, unnamed heroes who watch our progress through the veil of eternity and cheer us on, I find myself wanting to “run” all the more harder. 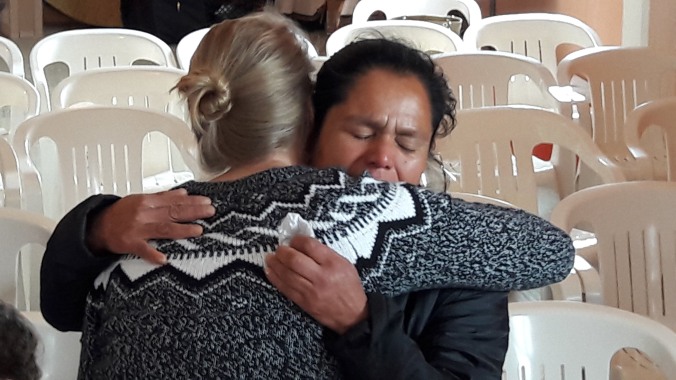 Praying for Pastor’s wife, Gregoriana. Such a precious woman!

One thought on “Heroes of Faith”