I never thought crackers and cream cheese could have any spiritual purpose. But, if there is one thing I am learning doing missions work in Mexico, is that little things can have great impact. Even a snack.

As a missionary family, we are involved in a variety of churches in our area. Some Sundays are what we call our “Marathon Sunday.” We will begin the day attending a 10 a.m. service in the town we live in, San Juan del Río. Then, we will pile into the car and drive about an hour away, to a country church in “San Francisco.” (Not to be confused with San Francisco, California. Nope. Not even close!)

We attend, and often preach to the little congregation there, numbering about 40 attendees, if you include the cows that are meandering about outside in the grass parking lot. By the time we finish the service, it is 3:00 in the afternoon, and my family (who breakfasted at 9 a.m.), is feeling pretty grumpy and faint from hunger.

After following this routine for a couple of weeks, “Momma” got smart and decided we needed a strategy to survive “Marathon Sundays:” a snack! Now, we stop at a roadside convenient store, and purchase cream cheese and crackers. I keep a roll of paper towels and plastic spoons on hand in the car, and my family of 7 each gets a paper towel, (except for dad cause he is the driver), and a steady supply of crackers spread with cream cheese, as we travel down the Mexican highway.

We hadn’t been doing this very long when Sandra, a friend of ours who attends church in San Francisco, asked me to meet with a friend of hers who needed help: Jane* had two small children, but hadn’t seen them for weeks because her husband was leaving her. In her despair, she believed suicide was her only option. I met Jane and began to ask her if she knew the Lord. She had never known more than an occasional religious service that held no meaning for her.

As I began to explain to her the plan of salvation and the great love that Father God has for her, she clung to my words like a drowning man to a lifesaver, tears streaming down her cheeks. I spent some time reading verses from the Bible, and then prayed for her. She told me simply hearing the Bible had brought her peace.

When I encouraged her to continue reading, I found out she didn’t have a Bible! That week, I shopped around for the loveliest Bible I could find and brought it to her. Her smile made the two hour trip worthwhile.

Several months later, when I was visiting with her again, she committed her life to Jesus. 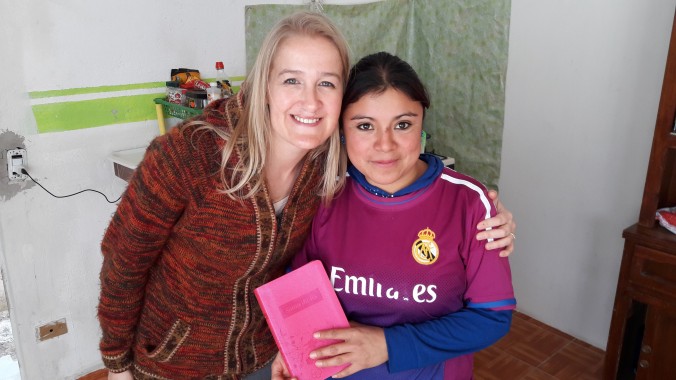 A few weeks after meeting Jane, Sandra told me her mother was dying and asked me if I would speak with her. I agreed, and then Sandra cautioned me that her mother had never accepted Sandra’s beliefs and that every time Jesus was brought up, her mother would become angry and insist she would hear no more. Oh boy. Not exactly what you want to hear right before you take the plunge to share the Gospel!

Sandra’s mother is about 4 1/2 feet tall, and she was in a frail condition, bent over almost double. She was struggling to walk, and required assistance for basic tasks. But, Sandra was determined. She introduced us and I began to call her mother, “Mamita.” (meaning “little mother” in Spanish, a term of endearment here).  I began to explain to her the plan of salvation. She was agitated, moving about in her seat, running her hands over her eyes, and I braced myself for an explosion. The one advantage I had was that Mexican culture is very gracious, and it would be a serious affront for a Mexican to berate, confront, or argue with someone they had just met. So, I plunged ahead, but I could see she wasn’t happy with the conversation.

I began to share with her about my own Grandma and her rejection of our beliefs. My Grandma used to become angry and lash out when I would speak to her about Jesus. But, she loved to travel and would plan extensive trips. One day, my dad asked her if she would like to plan her trip to Heaven, and began to share books with her about Heaven and the life after death. My grandma began read and consider, and over time, accepted Jesus as her Lord.

I had just finished the story when “Mamita” looked up at me (making eye contact for the first time since the conversation had begun), and said,

“I need to go to the bathroom.”

My hopes for her plummeted.  “This is not going well,” I thought.

Twenty minutes later, Mamita was sitting back down again, and I was at a loss for how to proceed. I began to ask her about how she had been feeling. She began to tell me about her pain, her elevated blood pressure, blood sugars, mobility issues, etc.

“But, you know the thing that is disturbing me the most right now are my nerves,” she confided in me.

“Your nerves? What is happening?”

“I must be going crazy. For the last week, just as I am falling asleep, these horrible voices begin to speak to me,” she replied. “They are saying things like, ‘You belong to us.’ ‘You’re coming with us.’ I sit up in bed and look around to see who is saying such horrible things, but no one is there. I feel such terrible fear and then begin to have a panic attack.”

Chills began to run up my arms as she confided in me. I gently took her by the hands and told her,

“Mamita, that isn’t your nerves. Those are spirits who have gathered to receive you when you die. You see, when you don’t belong to Jesus, the One who represents life, and hope and peace, there is another reality. And that is an eternity without God and His presence. These spirits represent the torment, fear, and darkness that awaits those who have not accepted what Jesus did for us to make us God’s own children.”

I went on to explain what Jesus did for us on the cross, and the power of entrusting our lives into His care. She listened with her head bowed, gazing at the ground. When I finished, she looked me in the eye again and said,

Sandra was there beside us as we prayed. We were three women sitting in a circle: One woman, a daughter, berated for her beliefs, now silently weeping as she watched her mother take a step she had believed impossible. Another woman, her hands gripping mine, the wrinkles and sign of age giving way to a beautiful smile as she prayed. The third woman, looking out of place with blonde hair and light skin, praying with “Mamita” to receive Jesus in a language not her own. This moment was a little piece of Heaven on earth. 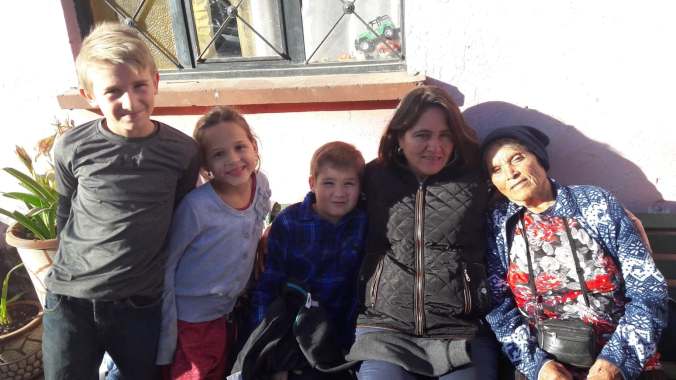 “Mamita” is on the far right, with her daughter Sandra, and 3 of our kids. This is the day she received Jesus. Update: her doctor says she is no longer dying! She is getting better each day and last time I visited with her, she said she was feeling well enough that she was thinking about getting a boyfriend.

A few weeks after this glorious moment, Sandra wanted me to talk with her niece, Sara*. Sara has two children, is unmarried, and was not making good decisions for her life or her family.  Sara’s mother had had enough of her irresponsibility and was going to have her children taken from her. Just as I did with Jane and Mamita, I sat next to Sara and began to talk about her life, her decisions, and her need for Jesus. She agreed, and prayed with me to receive Jesus.

She asked me to accompany her to talk to her mom and convince her to give her another chance. I did, and two hours later, her mother, (Laura*), went from raging about her daughter to me, to allowing me to pray with her and her daughter. Laura is still staunchly against Christian beliefs, but she said that if it would help her daughter change, she is not going to stop her from learning more about Jesus.

I continue to pray for Sandra’s family, that they will ALL experience an encounter with Jesus and will be united in love for Him. The amazing part about Laura is that even though she vehemently disagrees with Christianity, she has allowed me to pray with her twice. The last time I visited her, she told me as I was leaving,

“Katy, (what everyone calls me here, pronounced “Kah-tee”), I want you to know you are always welcome in my home. And don’t just feel like you can only come with my sister. Come visit me sometime without her, and bring your family.”

Sandra was there when Laura said this, and told me,

“That is the first time my sister has ever opened up to a Christian. She isn’t just saying this. If she invited you to come to her house, then she really trusts you and wants you to come back.”

Later that evening, my family arrived home from San Francisco and piled out of the car. The sun had gone down; We had spent our entire day in church, traveling and ministering to people. I was exhausted and looking forward to a good nights’ rest!

That’s when I noticed the mess. As I began picking up trash and sweeping cracker crumbs from the seats of our car, I began to think about Jane, Mamita, Sara and Laura.

Just like the many crumbs, we are scattering seed on so many hearts and lives, and we are seeing miracles take place!

Our Sunday snacks are messy, and it’s not always easy to spend the day driving out to the little group of believers in the country town. But, I certainly wouldn’t trade this for the world. And the crackers and cream cheese? They are truly a life-saver. In more ways than one.

Joey enjoying his cracker/cream cheese snack in the car.